When we were first house hunting, a sweet old lady and friend had passed away – though it was her time, she was well over 90 years old, she was the most precious little lady and is very much missed by many. Here is a photo of her from our wedding in 2010. 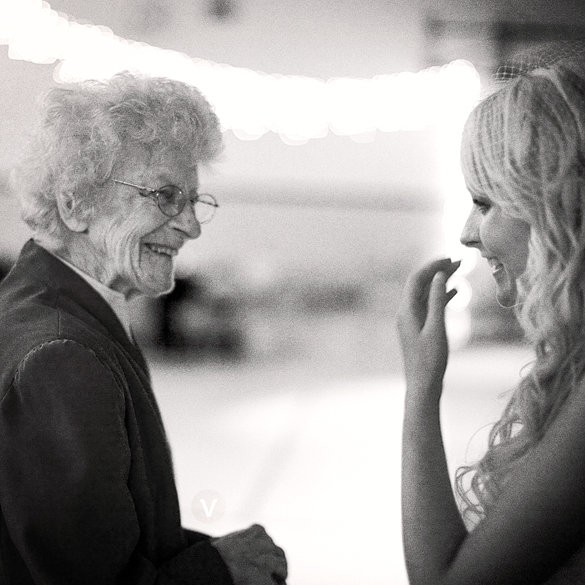 Shortly after she passed, my mom was contacted by her relatives that they had a bunch of her furniture they were selling. Knowing we’d need much more furniture to fill our future house, I decided it would be a great opportunity to remember her and to get some really great mid-century modern furniture. It was also a steal of a deal, only about $300ish for two dressers, a hutch, a credenza, two night stands, a headboard and bed frame, and dining room table with six chairs. Some of it was in great condition, some had seen better days. 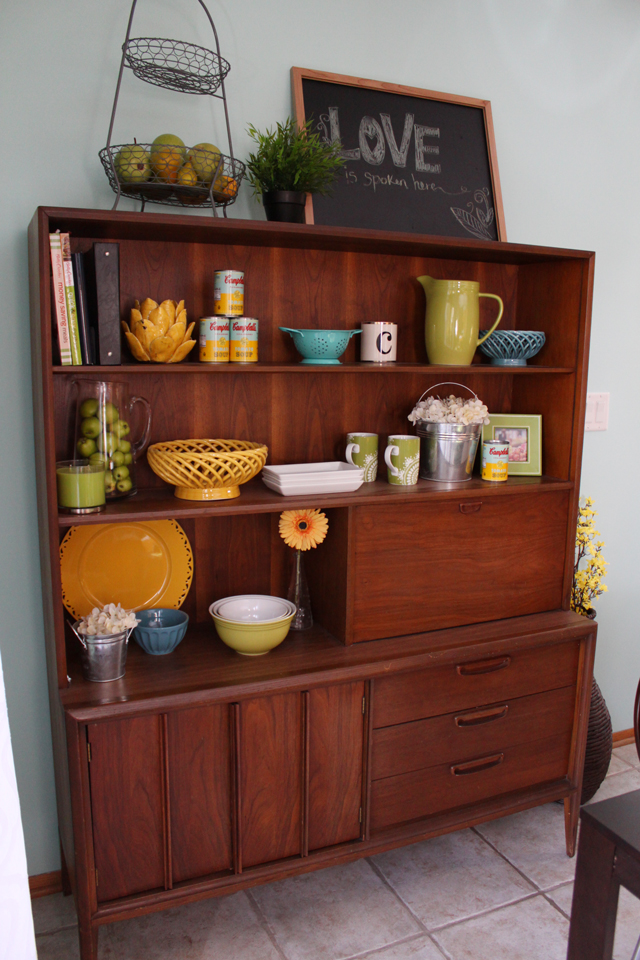 Currently, the hutch is in our kitchen which is holding a lot of extra dishes and kitchen appliances and showcases some colorful pieces. This one is in pretty good shape, a few dings, but I could probably easily get them out without having to start from scratch. It also has a laminate piece that wouldn’t sand and stain well anyways – and the color works in the space. 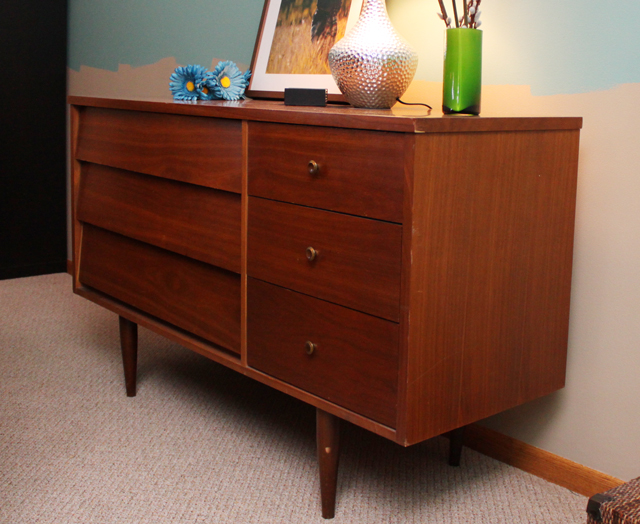 The credenza is currently in our family room acting as a place to hold a lamp, decor and inside board games and puzzles. This one is also in pretty good condition. It is on my list to do something with it some day – no rush on this one though. I’m thinking about painting it somehow because it also has a laminate piece that won’t sand or stain well. 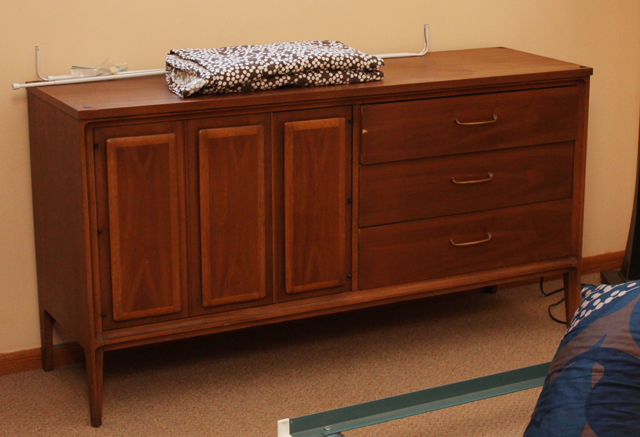 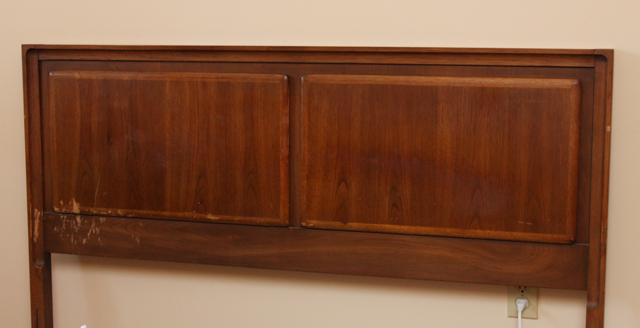 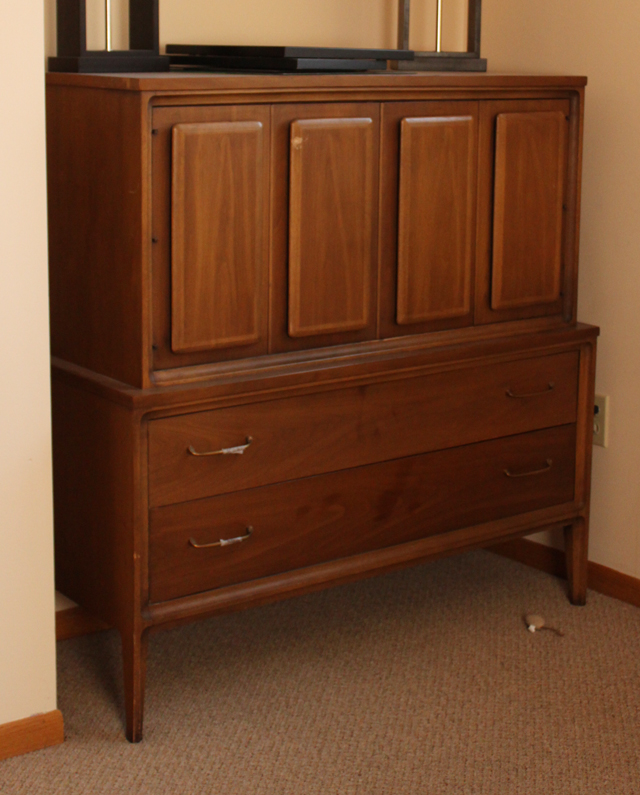 The dressers and the bed frame is in our spare bedroom downstairs. They are neatly positioned, but the room right now is just a dumping ground for excess stuff. Someday we’ll get to it.The kitchen table and chairs need a new home. We got them before we even knew what house we are getting, but we just don’t have a good space for them in this house. I’m still deciding what I want to do with them – they may very well end up craigslist. They are chilling in our basement until then.

Now onto the nightstands. Those found a home in our bedroom because we were previously just using Ikea Lack tables and those aren’t the greatest things in the world. These two nightstands didn’t match, but that is what also makes them more unique. However, they were pretty badly damaged with water stains and chipped pieces. They also were a much lighter color than our dressers in the same space. So I decided I’d try refinishing them. You know because I’ve done it soo many times before. Ha.

So based on my extensive research (ha.. or pinterest), I picked up sandpaper, stain in the jacobean color, and some water-based polyurethane. After sanding for a few minutes thinking this was going to take an eternity, I remembered my dad had an orbital sander. Dad to the rescue! That helped speed things up a ton. However since this was my first time refinishing a nightstand, I learned the hard way how deep you actually have to sand it to get it to accept the stain evenly. Because of that mistake, after staining it, the stain was really sticky and I had to basically re-sand everything.

Once I finally had it sanded properly, I applied two coats of stain – wiping them off each time after about 20 minutes and waiting a day in between. Then after everything was good and dry, I applied three coats of poly, waiting a few days in between for everything to dry completely. I also then waited another 3 days before I put the nightstand back in our bedroom ready to be used.

Check out the before and afters below: 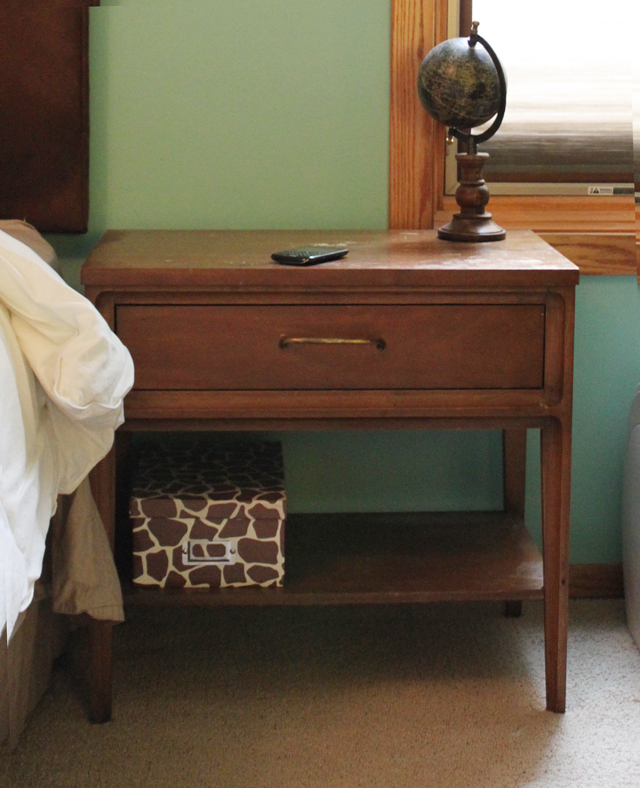 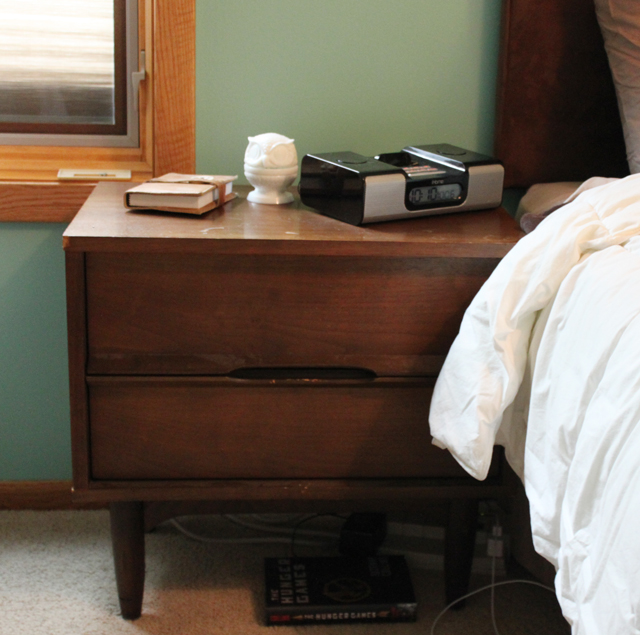 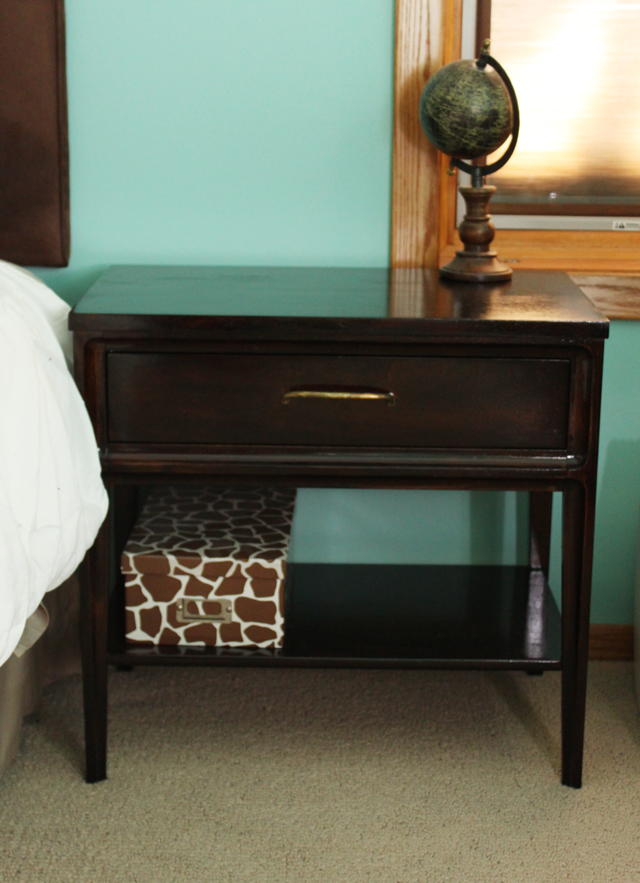 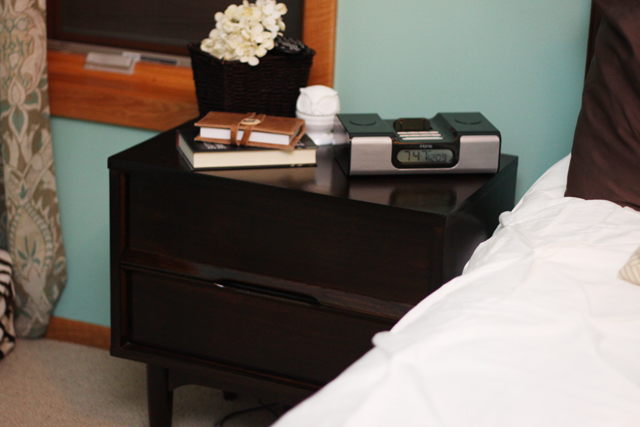 Another fun thing, I found a bunch of random things hidden in the nightstands – they must have fallen out of the drawers at one point and got caught in between. Such cute little notes and memories. This one was a set of matches with a note from someone that said “Something to keep the home fires burning!” and the matches were from Roberts Restaurant, I believe an old historic restaurant in Milwaukee, that is no longer there. 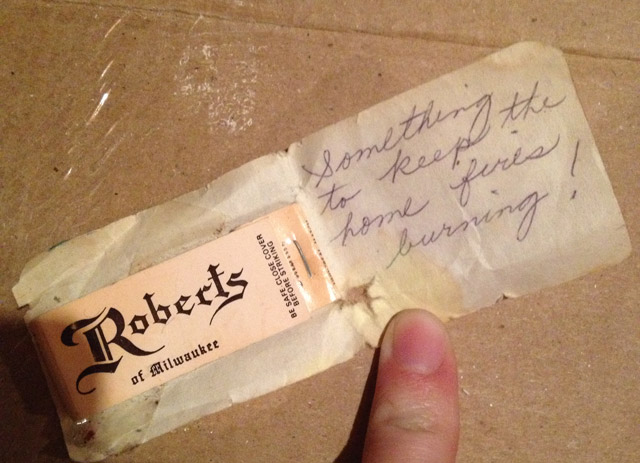 I think it would make Miriam very happy knowing that I ended up with a bunch of her old furniture and I’m very thankful for the opportunity to have it!

One thought on “Remembering Miriam”